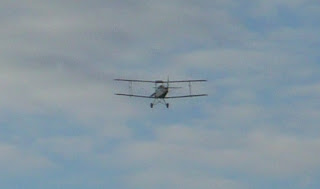 I had a "significant" birthday earlier this year, and to help me celebrate, my family gave me the opportunity to fulfill a life-long ambition – to fly in an open-cockpit biplane. Not only that, the flight would follow the training flight path used by 617 Squadron as they prepared for their famous Dambuster run 70 years ago.


You might wonder why  someone who spends most of her days engrossed in the Regency period, and whose idea of a thrilling time is to visit a National Trust property, should want to do such a thing, but long before I discovered Mr Darcy or Heathcliffe  I had another hero – Biggles.  My father had a few books by Captain W E Johns in his bookcase, and once I had devoured them I began to spend my pocket money on buying more.  I was hooked, especially on the stories of Biggles during the First World War, flying the famous Sopwith camel.

Unfortunately those early flying machines are very rare now, and certainly not available to give joyrides to the general public (and since the Camel is a single-seater plane, it wouldn't be possible in any case), so the Tiger Moth was as close as I was going to get. The actual machine we used was built in 1940, so it had been in service for 3 years by the time the Dambusters made their raid. This Tiger Moth is lovingly maintained in tip-top condition by the small and dedicated team at Blue Eye Aviation. Their enthusiasm is clear, and it really felt wonderful to be allowed to share their experience, even for such a short time.

My flight was booked for 6 pm, and we arrived in plenty of time, to be greeted by the strains of "Lily Marlene" coming from the reception tent, really recreating the 1940's atmosphere. There followed a very thorough pre-flight briefing (there was some talk of engines and horsepower, but if you want that sort of technical detail you will have to look online!)

After that I was kitted up in authentic (i.e. ancient) flying overalls and a flying jacket. The jacket was several sizes too big for me, but I didn't care – I was loving it! Then it was time to relax and wait for my flight.

At last it was time to take off – Will, the pilot introduced himself then it was off to get up-close and personal with the Tiger Moth itself.  Climbing into the cockpit was the first experience. They kindly put a shiny new step stool by the wing– possibly as much to protect the fragile aircraft from clumsy feet landing in the wrong place and breaking through the wing as to help novices climb up.  The first surprise is that the seating space is incredibly tight – I am not particularly big (despite how it looks in the pictures – that was the jacket, I promise you) and once in the seat my shoulders were almost touching the sides, although there was plenty of leg-room (but then my legs are not particularly long!)  The safety harness was fastened and checked, then I donned the helmet and goggles. 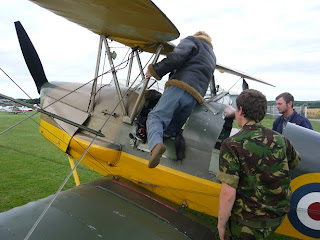 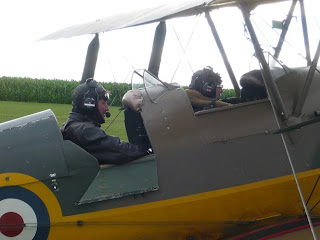 The next puzzle is, how on earth do you see where you are going?  Directly in front of me was the instrument panel, and since I was also sitting in front of the pilot, I guess his view was even more restricted (When I asked Will about it he said, "Don't worry, I just wiggle the plane around a bit then hope for the best" - he was joking, of course, he is an incredibly good pilot!).


The engine is started by a very brave young man called Lewis swinging on the propeller (where does health and safety come into that?).  The take-off was incredibly smooth and it was a surprise to find we were off the ground so quickly, climbing up and circling the airfield before heading off into the sun. The noise is deafening.  There was an intercom between me and the pilot, but although I could hear Will quite clearly, once we were up in the air with the engine noise and the added buffeting of the wind, I couldn't hear myself speak, which was quite disconcerting.  Not that I wanted to say much – I was taking it all in, the roar of the engine, the buffeting of the wind and the fantastic views.  Urban sprawl was soon left behind and the Peak District was spread out beneath us in the afternoon sunlight, emerald green broken up with huge swathes of purple heather. 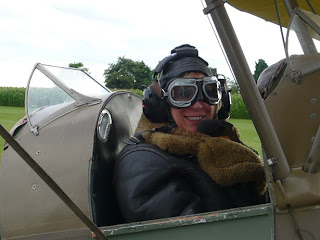 As we climbed the air became a little colder, but I was well protected in my flying jacket.  We flew for an hour and by the end my hands were cold but not uncomfortable. However, this is England's high summer, and I am not sure I would want to fly on a cold winter's day, at least not without extra layers of padding and some thick gloves.

I was allowed to take the controls for a short while, but let's face it, concentrating on keeping the plane flying straight is nowhere near as much fun as being able to look around while an experienced pilot banks and turns and does all the hard work, so I was very happy to hand control back to Will.  We flew on, over Derwent and Ladybower Reservoirs, banking around and following the actual flight path of those Lancasters as their pilots  made the final training runs (At this point I could hear Will humming the Dambusters March, which I am not sure is actually meant to be part of the experience, but I appreciated it all the same!)

We were not allowed to fly lower than 500 feet, but the Lancasters had to perfect the technique of flying at 60 feet if their mission was to be successful. Seeing the terrain from the air, the hills rising on each side of the narrow stretch of water, makes one realise just how difficult a challenge they were facing.

All too soon it was time to turn for home. The sun was behind us as we made our way back to the airfield, waving to walkers on a high ridge as we flew over them. I would have liked to shout "Let's go round again, let's go faster, further, higher!"  but of course I am far too well-mannered for that, so I sat quietly and tried to store all the sights and sounds and sensations as we roared back to the airfield.

A final, banking turn and we were back on the ground after the smoothest of landings – by this time I was not at all disturbed when Will informed me that this was "the shortest runway in Europe and oh, by the way, we have no brakes." 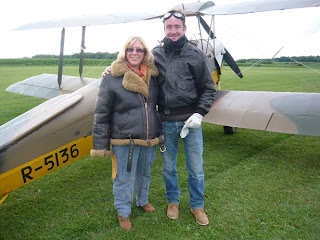 Then it was out of the plane, taking care as I removed the harness not to throw the belts back over my shoulders and smash the pilot's windscreen, stepping out onto the wing and down onto the grass, slightly disorientated by the lack of noise now the engine had been switched off.  The grin that had been on my face from the moment I put on that flying jacket was still in place as I went back to the tent for a glass of bubbly and to collect my photo and certificate (oh yes, I have proof that I actually took the controls).  A few last words with the crew and then it was off to end the perfect day with dinner and real ale in a local hostelry.

So now it is back to the real world (or in my case back into the Regency world of my latest novel). I really enjoyed my flight, so thanks to Lewis, Bradley, Chris, Will (hope I have the names right, lads). In fact, everyone at Blue Eye Aviation for making it such a fantastic experience.  I am now waiting for the DVD to arrive, so that I can relive the whole event.  And would I do it again?  Absolutely!

(Oh, and actually, they don't call out "Chocks Away" – it wouldn't be heard over the noise of the engine!)

If you want to know more, you can find out all about this wonderfully enthusiastic team at www.blueeyeaviation.co.uk 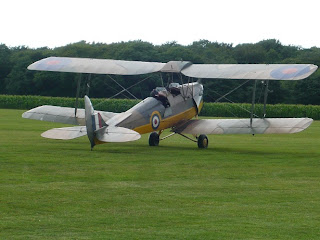