One would think, having made a battlefield tour years ago and then going over it all again when I wrote A LADY FOR LORD RANDALL, I would have had enough of Waterloo, but I could not miss the chance to be there for the recent Bicentenary.


I joined a small party to travel to Waterloo for the commemoration events taking place to mark the 200th anniversary of the battle. It was a convivial group, about 28 of us; some from England, the rest
from New Zealand, Australia, Canada and the USA. Our party also included at least seven descendants of people who had served at Waterloo, so we all had a strong interest in history and the battle. With estimates that a quarter of a million visitors were expected to descend on the area, we were quite prepared for crowds and disruption (or "risques de perturbations" as one road-sign advised us). One shock was to find that the farm of Mont St Jean (which had been a military hospital during the battle) had been decorated with a large plastic beer-bottle on the roof - Waterloo beer specially brewed for the occasion!  A little more tasteful was the huge image of the Charge of the Scots Greys fixed over the doors! 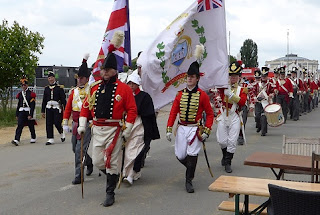 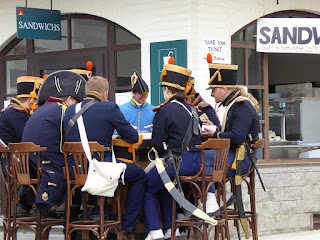 In fact, although the crowds on the Saturday were enormous, most of the time we managed to get everywhere and do everything we wanted without too much queuing or delay. Or perhaps we were just well-organised!

We arrived on the Thursday, when the French and Allied bivouacs were already teeming with soldiers.  It really was like stepping back in time.  For the first hour or so it was "Ooh look at that fantastic outfit/uniform/dress," or "More soldiers, quick, take a photo!" but it was impossible to keep up and it wasn't long before we felt it was quite normal to be surrounded by colourfully dressed people. There were stalls selling everything from stamps and mugs to wines and even Napoleon's perfume! Also period dress, anything from Regency bonnets to full dress uniforms. 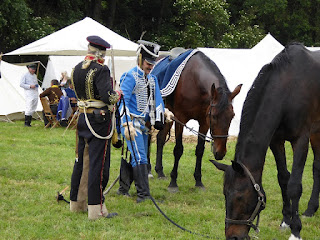 Reports say there were up to 6,000 re-enactors, 300 horses and 100 cannon assembled for the battle, and there were also many more enthusiasts who had come as spectators and were happy to wander around in their Regency outfits. 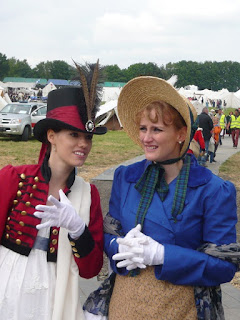 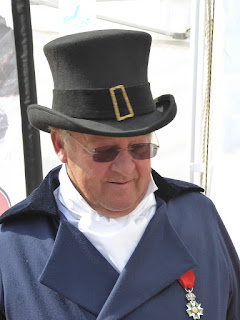 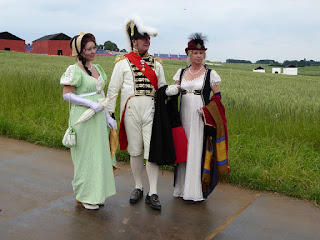 The re-enactors came from all over the world, the uniforms were superb and they were all so keen to show them off. The troops were split into two camps, the Allied Bivouacs gathered around Hougoumont, and the French Bivouacs a little further down the road, near Napoleon's last headquarters at Le Caillou. 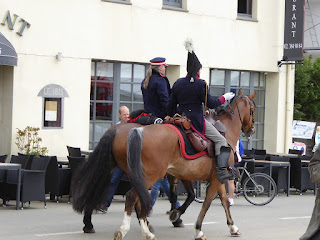 Just walking through the camps was hugely exciting, the air smelled of woodsmoke from the camp fires, soldiers paraded, marched or stood around in groups chatting. 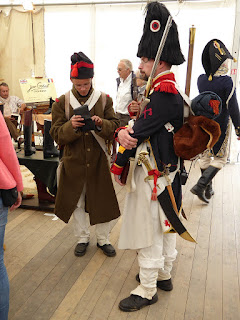 In one area we saw Hanoverian soldiers tying wooden poles to a door to make the stretcher for carrying the wounded Prince of Orange from the field (very prescient of them) while in quiet spaces the cavalry were tending to their horses.  As we gazed out over the sea of tents I was reminded of Lydia Bennett's delight at going to Brighton where there was a whole camp full of soldiers. Now I know how she felt!


We visited Hougoumont and saw the new British memorial, officially unveiled by Prince Charles on the 18th June.  When we were there on the Friday (19th) the artillery were practising, so as we walked around the courtyard there was the ominous sound of gunfire – very atmospheric.

The re-enactments took place over two nights and I thoroughly enjoyed the whole thing. The corn had
deliberately been left growing and although it was waist high, rather than the six foot crop we are told was there at the time of the actual battle, it did give a good idea of what the soldiers would have faced and provided a wonderful image when a single rider galloped across the field, leaving a shimmering wave of moving corn in his wake.


Before the action started Napoleon and his entourage rode past the stands (we were not surprised that he received more cheers than boos). On the second night the Allied PR team had clearly decided they were losing the publicity battle so Wellington was persuaded to make a similar tour, waving his hat to the crowds and when he reached our stand he even made his horse rear dramatically, to huge cheers from the crowd. I suspect the Duke was not at all impressed with having to pander to the hoi polloi in such a way, but there, that's democracy for you!


The spectator seating and standing areas were arranged around two sides of a small part of the original battlefield – the site of D'Erlon's attack against the Allied centre. One needed binoculars to see the action on the far side of the field, and unfortunately some in the southern-most seats had a very poor view because of the rise in the ground, but fortunately we had a good view of the battle – until the cannon started firing and everything was enveloped in smoke.


If anyone was hoping to learn about the battle in detail from the evening re-enactments then they were probably disappointed, but for an idea of the chaos, smoke, confusion and noise of early 19th century warfare, it was brilliant. The organisers had arranged for models of Hougoumont, La Haye Sainte and Pancenoit to be built on the battlefield and various actions took place around these structures . I know some of the re-enactors were disappointed that the spectators would not see much, given the size of the battlefield and the smoke from the guns, but I thought it all added to the drama of the occasion and helped one to imagine just how it must have been on the day. On more than one occasion we were asking each other what on earth was going on, and it can't have been much different for the men and officers back in 1815, the smoke was too thick to make out uniforms and whole divisions could be hidden from view.  During the re-enactment, the number of troops engaged in fighting around the model of Hougoumont gave some idea of the hard-fought original battle, where 3,000 Allied soldiers kept 13,000 of Napoleon's troops at bay. At times the action here was a little too enthusiastic, and the plywood walls collapsed!
I thoroughly enjoyed the whole experience – we saw skirmishers and the first troops on the field literally wading through the waist-high corn, we watched in awe as a seemingly never-ending column of men and horses moved across the skyline to take up their positions, we heard the cheers, the bugle-calls and drums.  Through the smoke we saw soldiers form square before a cavalry attack and watched the orange flash moving across a line of infantrymen as they fired a volley. The 300 horses taking part looked magnificent although there were a few worrying moments when we saw a couple of riderless horses galloping off the field – clearly they did not like the gunfire.  For me one of the most surprising experiences of the re-enactment was before the action had begun, when a party of officers galloped past. I expected the ground to shake with the thunder of hooves, but instead what I was most aware of was the hiss of the corn hitting the riders' boots and stirrups (look out for that in future books!).  Another surprise was how resilient the corn proved. In the area near our grandstand, where there were small skirmishes and some artillery action, the corn was almost intact even after the two nights, although I imagine where the main action took place, including the marching columns of the Imperial Guard and the cavalry charges, the corn would have been flattened.  We didn’t have the mud that the original soldiers experienced, either, but no one complained about that!


Of course, it was on a much smaller scale than the real battle – this was a mere 5,000 troops putting on a show for two hours a night, whereas in the real battle over 100,000 men fought for over ten hours and left more than 40,000 dead and wounded. The smoke from just this relatively small number of guns threw a misty pall over us as we made our way back along the road to find our coach, and it was easy to imagine just how thick and black the smoke from  must have been in 1815.
For me, the re-enactments were fantastic, but they were only part of the whole experience. It was wonderful to be able to spend hours walking amongst the tents, to see the soldiers and their camp followers going about their daily routines. It was living history. 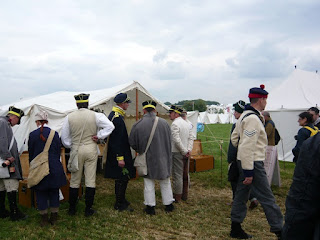 On the Sunday morning we went to a corner of the field where Adams's Brigade had been stationed. There we listened to the Waterloo descendants amongst our party telling us about their ancestors and lay a wreath. For me it added considerably to the moment that while we were listening to the readings behind us some of the re-enactors were preparing to leave, so we had marching feet and the clatter of a gun carriage being moved, and as we were about to leave some of the soldiers began marching away.

A fitting ending to a fabulous few days.

There are any number of sites online with films and photos of the re-enactment, so do please search them out for more details - this is just a quick and very personal overview, but I hope it will give you some flavour of the event.