The summer holiday this year was supposed to be touring Scotland, but first we made a little detour and discovered an absolute gem of a naval museum. Those of us who write historical fiction need to know something about the transport of the time, and this was a wonderful evocation of a major part of that transport system. 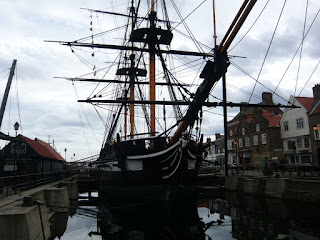 Hartlepool may not be the first place that comes to mind when you think of a day trip, but just by chance we discovered that it has a fascinating naval museum built around HMS Trincomalee, Britain's oldest historic fighting ship still afloat .


She was built in Bombay in 1817 and was being used as a training ship as late as the 1980s. She has since had extensive refurbishment and is now owned and maintained by a trust, and is part of the National Museum of the Royal Navy, although it is planned that she remains the focal point of Harlepool's "Maritime Experience". 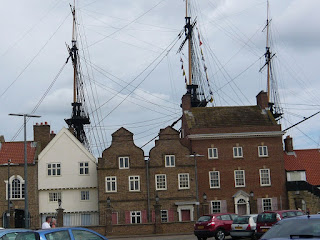 And what an experience! Even as we arrived we could see the masts of the ship towering over the houses that surround the quay. Forget the cars - imagine yourself a young man, fresh from the country where the tallest structure you have ever seen is a windmill, then suddenly you climb off the coach, look up and see these beautiful masts rising to the sky above the houses......
And once you are inside the "experience", you can see these houses for that they are, part of the recreation of a busy quayside as it might have been seen by the first crews of the HMS 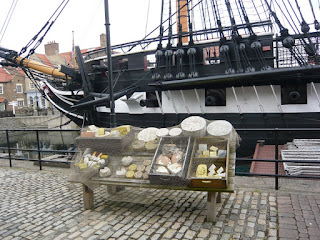 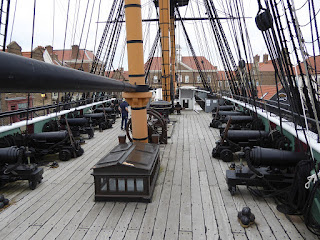 Once on board the ship itself, visitors are free to wander round with access to (almost) all areas.

One gets the feeling that the ship is ready and waiting for action.
Of course, there's not a lot of space, and one gets a good idea of what it must have been like for the sailors to live, work, eat and sleep in these cramped conditions. 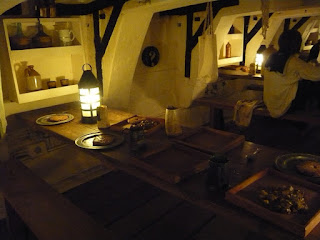 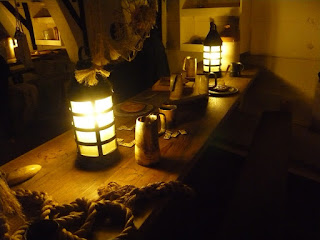 The lower one goes in the ship, the lower the ceilings (and there are a lot of wooden beams, so one needs to be careful.)  Children visiting the ship will love being able to run around like powder monkeys on the lower decks while grown-ups have to bend almost double to avoid banging their heads. There are nooks and crannies to be explored, very little is off limits and I just loved it! 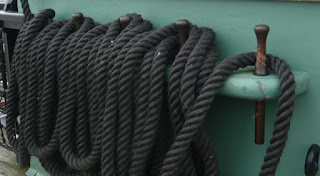 It was wonderful to see these belaying pins being used as they should be - when my heroine in Wicked Captain Wayward Wife finds herself in a sticky situation she uses one of these to batter her assailant. Here you can see they would make a perfect cudgel - in fiction only, of course!

Wandering around the quay there are lots of shops to be explored, including the swordsmiths and the gunmakers, where a fashionable gentleman and an officer are enjoying themselves inspecting the gunsmith's wares – including a fine set of duelling pistols. Another young man is in the tailors, getting a new uniform. 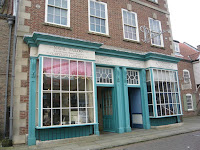 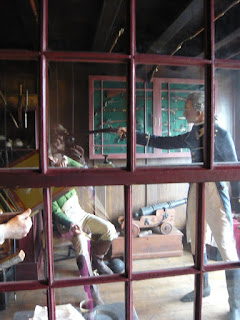 The amount of detail packed into each of the shops and houses is extensive, I could have spent a week there and not seen and read everything. The detail on the shop fronts, too, was fascinating, and it really brought the place alive for me.

There is even a grand house, where the master is resting prior to going back to sea (although with a gouty foot I wonder if he will be able to make it on board unaided). In another room his children play while the maids pack his trunk to the accompaniment of the mistress's sobs, for she has taken to her bed in distress at the thought of hubby going away again. 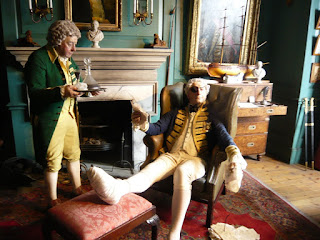 On the quay itself there is a ferocious crocodile in a crate, but whether he is being shipped in or out of the dock I don't know.


A sneaky peak into the printers shows the printers boy hanging up pages to dry, and in the alehouse one can see the sailors relaxing. You can also hear first-hand the stories of men who were press-ganged, learn about the sailor's life (and the captain's, too), discover how the ship's architects designed the warships, and even see the types of pests that ships and sailors have to contend with (tarantula, anyone?) 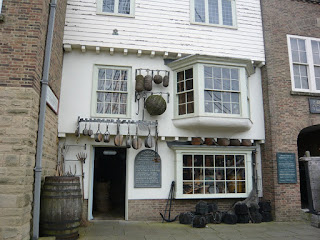 My favourite shop has to be the chandlers, which was packed to the rafters with every sort of useful item (I am sure some of us can remember this kind of hardware shop, where you could buy everything from a box of matches to a tin bath).  While you wander around, marvelling at it all, the chandler is berating his assistant, who is somewhere upstairs checking the stock. 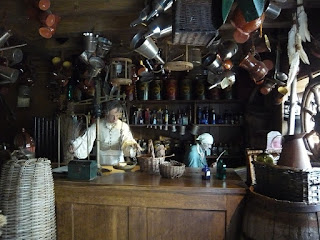 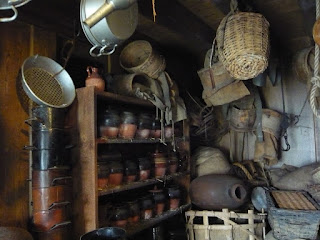 I was also  intrigued by Madame Volland's establishment, supplying wax figures and so much more. 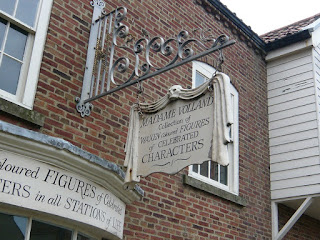 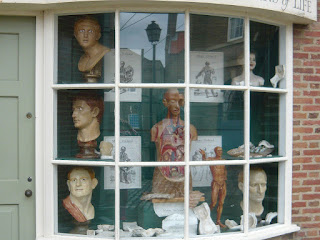 Unfortunately it seems that Madame is too exclusive to open her doors to the 21st century traveller, so all we have is her fascinating window with its anatomical body sections and a fine selection of spare eyes and teeth, for any sailors who should be unfortunate enough to lose their own.

We spent the day at this museum, enjoying the exhibits, taking the Fighting Ships Tour, being startled by the noise of the cannon and musket demonstration and generally soaking up the ambience of this beautiful and imaginative re-created dockland. And to think it is all in the name of research, because it has inspired so many ideas andI just can't wait to use them!
You can find out lots more detail about the HMS Trincomalee here, but I would certainly recommend a visit , if ever you are in the area.

I wouldn't be surprised if my next book should have quite a sea-faring flavour......